Ammonia is a word that has become part of the vocabulary for many within the agriculture industry in Northern Ireland. In this article Robert Edwards, CAFRE Air Quality Technologist, aims to provide a brief overview of ammonia, what it is, how it is produced in agricultural systems and identify agricultural practices and technologies that can be adopted to reduce ammonia emissions from farms.

Ammonia is a naturally occurring gas containing nitrogen and hydrogen, with the chemical formula NH3. Some agricultural practices and activities encourage the loss of nitrogen into the atmosphere in the form of ammonia.

Ammonia emissions can result from undigested protein from livestock diets excreted from the animal in faeces and urine. When faeces (which contains the enzyme urease) and urine (which contains urea) mix, ammonia is produced and released to the atmosphere. Ammonia is emitted whether the mixing of urine and faeces occurs on the floor of the livestock shed or during slurry storage.

Robert explains that based on 2020 calculations, 96% of the total ammonia produced in Northern Ireland comes from agriculture. Figure 1 provides thebreakdown, by sector, of Northern Ireland’s agricultural ammonia emissions for 2020. The figures show that cattle and sheep produce 68.9% of emissions, with pig and poultry producing 20.1%; the remaining emissions being from inorganic fertiliser spreading and land spreading of anaerobic digestate.

Why is ammonia an issue?

Ammonia is an air pollutant that can have significant effects on the environment and, indirectly, impact on human health. Many of the natural habitats in Northern Ireland have adapted to very low levels of nitrogen being required for growth.

Robert outlines that when ammonia is produced and emitted into the atmosphere a process known as nitrogen deposition occurs. Ammonia circulates as an atmospheric gas and is dispersed and deposited either as a gas (dry deposition) or in rainfall (wet deposition). When ammonia, containing nitrogen, is deposited in high concentrations it can acidify and enrich soils and fresh waters by over supplying nitrogen to nitrogen sensitive plant species. Excess nitrogen often has negative effects on sensitive habitats, causing increased competition from other plants such as grasses which out compete some of the lichens, mosses and herb species that have lower nitrogen requirements.

Over time continued deposition of nitrogen will increase the nutrient content of the soil, which will alter the balance of plant species in the habitat and the diversity of insects and animals using the habitat. In addition, excess nitrogen can be lost from soils into freshwater eco-systems. This causes a process known as eutrophication, where excess nutrients cause an increase in plant growth, removing oxygen from the water and adversely affecting the marine ecosystem.

As part of the UN Gothenburg protocol, the UK Government is committed to reducing ammonia by 8% in 2022 and 16% in 2030 compared to the levels of 2005. However, ammonia emissions have increased since 2010 due to rising dairy cattle numbers, and hence emissions from manure management practices for these animals, and from the spreading of cattle manure to agricultural soils. In addition, there has been an increase in other nitrogen-based fertiliser use, primarily urea-based and digestate fertilisers. (Air Pollutant Inventories for England, Scotland, Wales, and Northern Ireland: 2005-2020, October 2022)

Recent studies have shown that 98% of Northern Irelands Special Areas of Conservation (SACs), 83.3% of Special Protection Areas (SPA) and 88.3% of Areas of Special Scientific Interest (ASSI’s) have nitrogen deposition rates which will put the ecosystem at risk.

Balancing protein intake to the requirement of the animal will minimise excess nitrogen being excreted. A reduction of 1% crude protein content in ruminant diets can reduce NH3 emission by 5–15%.

Scraping Management – Peak ammonia emission rates from soiled floors occur between one and six hours after slurry and urine deposition. A regular scaping interval, of between one and two hours, can achieve ammonia reductions of up to 20%

Slurry Covers - Covers on outdoor slurry stores (above ground slurry stores or lagoons), can effectively reduce ammonia emissions. This is achieved by decreasing the surface area exposed to air movement, reducing emissions. Various types of covers are available, with one of the most effective systems being an impermeable tensioned fixed cover (Fig. 3) offering an emissions reduction of 80%

Fertiliser - Introducing protected fertiliser products, treated with nitrogen inhibitors, slows the loss of nitrogen to the atmosphere allowing more to be available for the growing crop. Protected urea, compared to conventional urea, can reduce ammonia emissions by up to 79%. 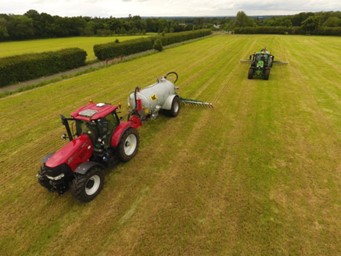 Urine, when excreted by grazing animals, does not normally mix with faeces, so the action of urease on urea in urine is minimised; meaning lower ammonia emissions when livestock are at grass. Therefore, ammonia emissions per animal are much less during grazing compared to housed periods. AFBI have calculated that a total confinement dairy system has an increase in ammonia emissions, per litre of milk, of over 30% compared to a traditional system where the cows graze during the summer months.

Northern Ireland livestock farmers are facing increasing pressures to reduce ammonia emissions from their farming enterprises. However, technologies and management practices exist which will reduce the ammonia losses from farms to the atmosphere. Reducing nitrogen losses from farms will bring benefits to both the farm business and the environment.

The Department of Agriculture, Environment and Rural Affairs (DAERA) has launched a consultation on its draft Ammonia Strategy - the first of its kind for Northern Ireland - and is keen for anyone with an interest to participate and provide their views. Responses to this consultation will inform a reworked strategy with proposed targets for 2030 that will help to secure the restoration of biodiversity, ecosystems, and the services they provide, while also facilitating the sustainable development of a prosperous agri-food industry.  This public consultation is open for a period of 8 weeks until 23:59, 3 March 2023. We welcome as many views as possible from all interested organisations and individuals. An information event has been organised at each of the three CAFRE campuses. Greenmount Campus 24th January 2023, Enniskillen Campus 25th January 2023 and Loughry Campus 31st January 2023. Each meeting will commence at 7.30pm and last approximately one hour. To reserve your place at a meeting please register through Eventbrite.

Download  further information including details of how to respond.