Gardens - pests and diseases to look out for

X. fastidiosa is a bacterial pathogen, which has been found in parts of France and Italy, and could have a wide and damaging impact on nursery stock production, urban landscapes and countryside. It causes multiple symptoms including wilts, diebacks, stunts and leaf scorches. The EU is on high alert for this pathogen and we must be especially vigilant in the UK.

Insects and nematodes may also pose a serious risk to plant growing in the garden setting.

Fireblight is a bacterial disease of certain woody plants from the Rosaceae family.  These include common plants such as Amelanchier, Chaenomeles, Cotoneaster, Crataegeus, Cydonia, Eriobotrya, Malus, Mespilus, Photinia davidiana, Pyracantha, Pyrus and Sorbus

Tissues affected by the symptoms of Erwinia amylovora include blossoms, fruits, shoots, and branches. All symptoms are above ground and are typically easy to recognise.

For many years Northern Ireland has been a ‘protected zone’ for fireblight, however, this was relinquished 30 April 2018.  Bringing fireblight-susceptible plants into a protected zone is forbidden unless they have a passport indicating that they have been sourced from a fireblight protected zone or a buffer zone. 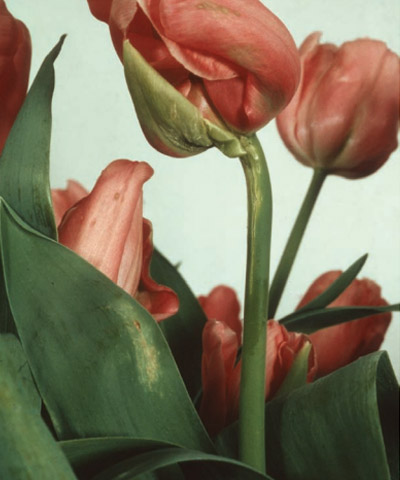 Stem lesions, necking and green petals on tulip
Stem nematode, Ditylenchus dipsaci, is one of the most serious plant-parasitic nematodes of temperate regions, including Europe and the Mediterranean area. The pest is becoming more common in the UK, with a significant increase in the number of outbreaks reported in recent years.